Insights from the compilation of key market performance metrics since 1990 are contained in this report and include a range of findings that challenge some of the broadly held perceptions of the Melbourne CCR apartment market’s current status.

The results confirm that not only has there been an unprecedented level of supply of apartments in the Melbourne CCR, but (and just as importantly) that there has also been a historically high level of purchaser demand.

The primary (purchaser) market remains robust and has peaked whilst the secondary (renter) market is also stable.

These current conditions suggest that the market should slow as completions escalate.  The fundamentals underpinning the market however may be undermined by recent reductions in liquidity to purchasers, especially the increasingly significant cohort of international buyers.

Charter has consistently observed that it is incorrect and too simplistic to equate the unprecedented level of supply of apartments to be representative of an “oversupply” without considering the corresponding demand side indicators.

Furthermore, many current perceptions of an “oversupply” are misinformed and reliant upon indicators of potential future supply rather than real supply.

Time series analysis of unsold stock overhang metrics suggests that the primary (purchaser) market is not oversupplied.  Overhang in projects that are under construction or recently completed is in fact lower than the long term averages.

It is likely that the previously anticipated levels of future stock will not eventuate due to either withdrawal of marketed projects, delayed construction commencement or deferment of prospective new releases.

Rental market indicators also do not suggest that the secondary (renter) market is oversupplied.  Rents have remained flat, or increased marginally, whilst vacancy rates have in fact tightened since January 2016.

Whilst the risk of weaker rental market conditions over the near term remains, the impacts will be intermittent and diluted by lower than previously anticipated supply. 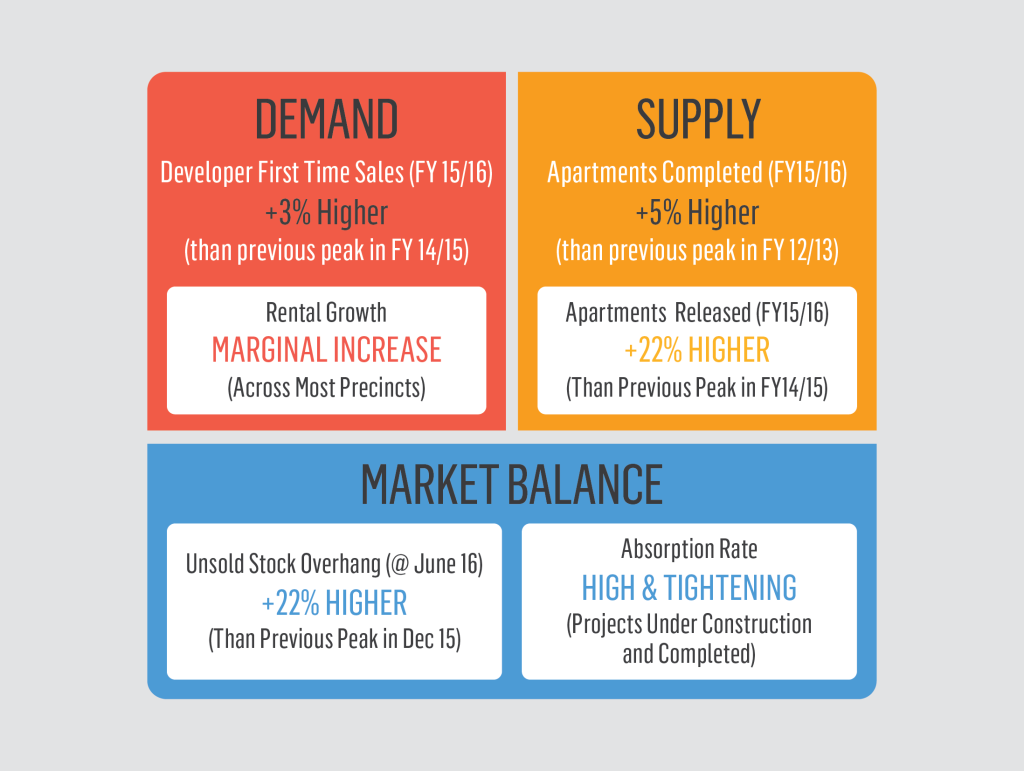 Over the last 12 months there have been several FIRB, taxation and macro-prudential “cooling” measures to slow the overall housing market which have had (and will continue to have) a direct impact on the Melbourne CCR apartment market.

The cumulative effect of these measures has been far more significant than any single measure in isolation and this is particularly the case with respect to international purchasers.

Fear of the potential impacts from these changes has caused a strong reaction in lending policies.   Financiers have justifiably imposed stricter terms but most recently have introduced blunt restrictions on international purchasers about to settle on apartments that were contracted 2-4 years ago when there was a fair expectation that domestic financiers would support international purchasers.

There is reducing liquidity from traditional sources which is compounded by recent stricter enforcement of capital flows from China.  This reducing liquidity may pose a risk to the Melbourne CCR apartment market over the next 6-12 months, however evidence of significant settlement defaults is yet to emerge.

Charter observes that stricter lending policies appear to have less to do with the underlying asset quality and much more to do with the reactionary response to tighter macro-prudential regulations.

It is expected that purchaser demand for new apartments will decrease from its current peak level although it is anticipated to continue at an above-average level in the short-term, given the range of supportive structural changes from the demand and industry perspectives.

Underlying demand from international buyers is still considered to be soundly underpinned by a continuation of various market and other factors that will ‘push’ towards Australia.  Recent changing foreign investment regulations in similar markets (such as Vancouver and Auckland) are also likely to have a positive effect for the flow of investment into Melbourne.

It is likely that the Melbourne CCR apartment market will undergo a compositional change in its offering over the near term to reflect the greater maturity of the apartment living concept in Melbourne.

Full details about the key findings and observations for the Melbourne CCR apartment market can be found in Charter’s State of Market Report.