Our cities and urban environments are being transformed by the movement of young adults in search of opportunity, education and culture.

There are regions in our cities that are hot spots for those aged 20 to 40. These areas resonate with the dynamism and energy of this age group.

Young adults on the move

Australia has benefited greatly from Asia’s ongoing economic expansion, not only through demand for our resources, skills and services, but also through the continued migration of highly skilled 20 to 40-year-olds motivated by the opportunity to further boost their skills and income and to establish households in an Australian setting. 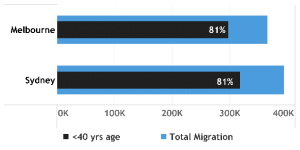 Young adults bring tremendous consumer, economic and social energy to wherever they go. In property markets, this cohort is a major component of apartment rental demand, particularly during the phases of higher education and early career development. This often transforms into first home owner demand as young adults partner and commence families, taking on the challenge of seeking out more space in the best location.

Meeting the housing needs of Millennials

Millennials have not taken up home ownership to the same extent as previous generations, yet many Millennials are now at an age where family formation traditionally becomes an important priority.

Accommodating the housing needs of Millennials is a major opportunity and challenge for the property industry.

Millennials will shortly make up more than half of the workforce and will quickly enjoy the greatest share of disposable income in the economy. Their preferences and tastes will therefore lead and shape all markets in the years to come.

The Millennial preference for e-commerce, urban living and food based recreational pursuits has already impacted on residential, retail and industrial property markets.

As their incomes and households grow the opportunity for the property industry to meet the needs of this generation will diversify and expand particularly in first home owner markets where lower interest rates and flatter property prices have the potential to attract greater shares of Millennials.

Charter has identified distinct areas where this cohort is congregating and, in turn, invigorating local markets and activity. 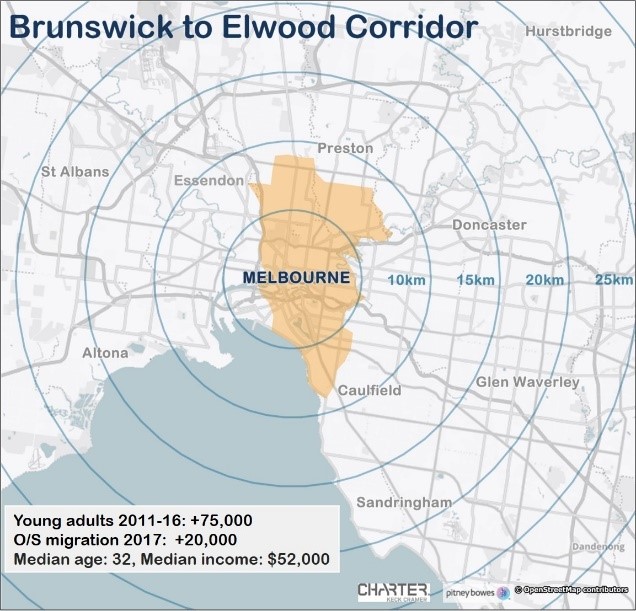 In Melbourne, the corridor running north south between Brunswick and Elwood (effectively the same span as the 96 tram route) is one of Australia’s primary hot spots for 20 to 40 year old migrants from within Australia and overseas.

There is nothing sleepy or sedate about the Elwood to Brunswick corridor, which is now packed with highly active Millennials, who have effectively underwritten the inner Melbourne apartment boom of the past decade, primarily as tenants of new buildings.

World class educational facilities, a vibrant night time/food economy and significant employment opportunities in professional services are drawing in high volumes of 20 to 40-year-olds from across Australia and internationally. In inner Melbourne, successive waves of investment and migration are resulting in a virtuous circle of demographic and economic growth and vitality.

Melbourne has emerged as a major driver of Australia’s economy. Undoubtedly, the vitality of the Brunswick to Elwood corridor is a key part of this success and an important national asset.

Anchored by nationally significant and increasingly complementary research, educational and enterprise-based facilities, the Chadstone to Dandenong corridor is rapidly transforming in response to successive waves of investment and expansion that, in turn, is stimulating and responding to the ongoing migration of overseas students and young professionals. For the 2011 to 2016 period, the corridor drew in 29,000 overseas and 2,300 interstate young adults (in 2017 the corridor is likely to have added a further 9,200 young adults). 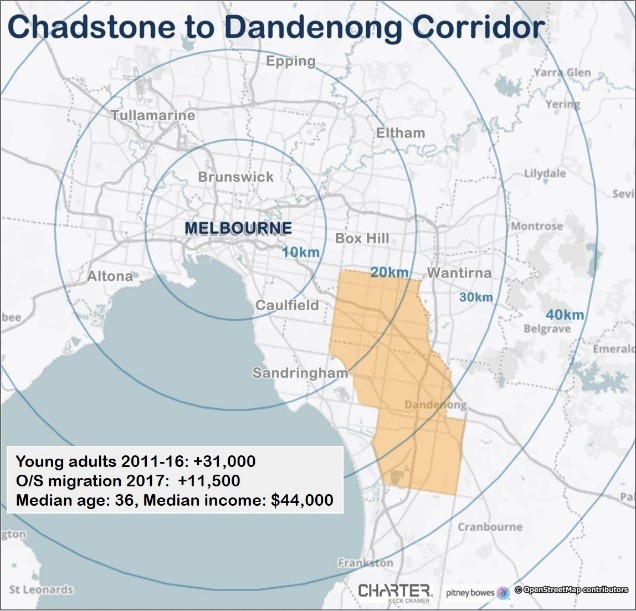 Encompassing both the rapidly gentrifying inner urban area of Footscray and the greenfield estates surrounding Werribee, this corridor is a major destination for first home buyers and young professionals seeking out either Melbourne’s last remaining affordable inner urban housing or, further out, house and land packages in greenfield estates.

Young adults especially from India (over 13% of Wyndham’s population now derives from southern and central Asia) are settling in the area in large numbers.

Just like Melbourne’s outer suburbs of the 1960’s, housing affordability combined with ever improving amenity is translating into a local baby boom. Truganina, which is within Wyndham, has the highest fertility rate in Melbourne of 2.72 children while nearby, Tarneit has a fertility rate of 2.45.
Over the next decade, an unprecedented package of already committed infrastructure projects will reshape the accessibility and liveability of the area, which, inevitably, will set the scene for greater private sector investment and local employment growth. Committed projects include the $1.8 billion western roads upgrade package, the $1.5 billion new Footscray hospital along with the Western Distributor and Metro Tunnel projects.  It is interesting to note that the corridor has a relatively high median income and is also drawing young adults, both from other parts of Victoria (5,000+ young adults in the 2011 to 2016 period) and from interstate. 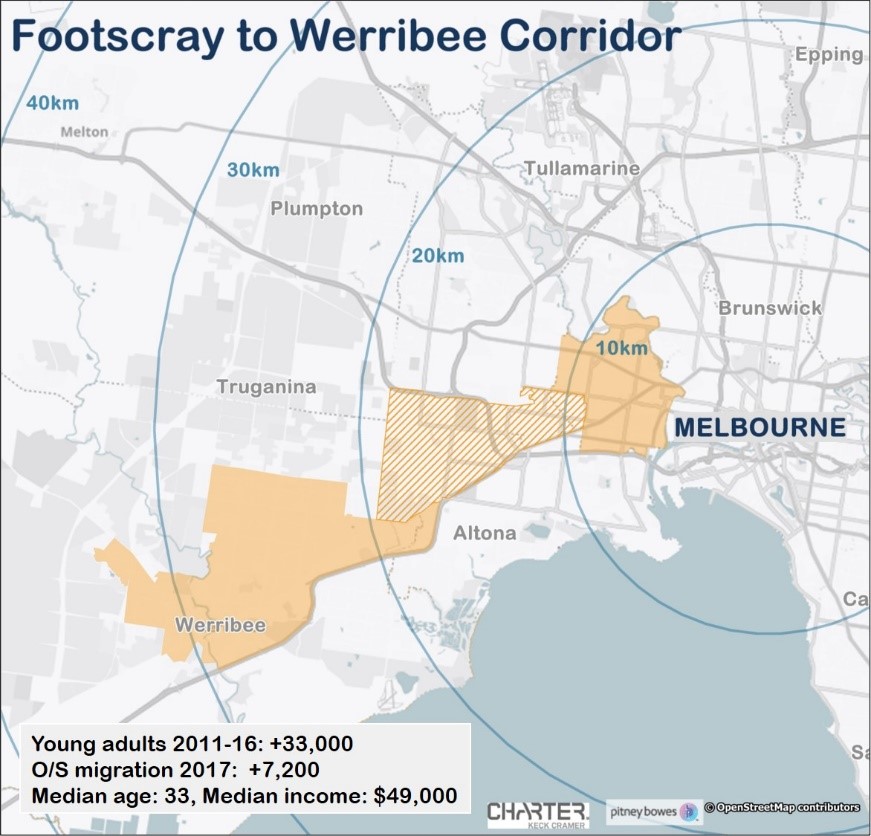 Millennials will shortly become the largest cohort in the workforce with the greatest share of disposable income in the economy.

Their consumer and housing preferences have already reshaped commercial and residential markets.  Arguably, their demand for inner city rental accommodation has helped underpin the recent apartment boom and their preference for online commerce has helped drive unprecedented demand for industrial land.

The Millennials, however, have not taken up home ownership to the same extent as previous generations, yet many in this generation are now at an age where family formation has traditionally been an important priority. Accommodating the housing needs of Millennials is a major opportunity and challenge for the property industry.

Click here to view a printable version of this insight.