Skip to content
< Back to News & Insights
SHARE
The first datasets for the Australian Census of Population and Housing for 2021 have recently been released whilst the balance are to be released towards the end of the year.

Canada and the UK also conducted their respective Census in 2021 and have commenced the release of statistics whilst the USA conducted its Census in 2020.

Although some of the statistics will be impacted by COVID-19, there is an opportunity to compare what has happened in various cities in these older countries (and more mature housing markets) over the last decade to gain learnings and trends for Australian cities.

-It is interesting to compare the total increase in private dwelling stock with the total population increase across various cities between Censuses. A simple metric to assess the relative growth is to calculate the ratio of new dwellings per new person (capita) delivered over the last decade.

-Several cities in both Australia and Canada are suffering major housing affordability problems. Some of this could be alleviated through delivering more dwellings to accommodate the rapidly growing populations. As it stands, Australian cities are likely to experience greater affordability issues given they are building fewer dwellings per person than their Canadian counterparts. 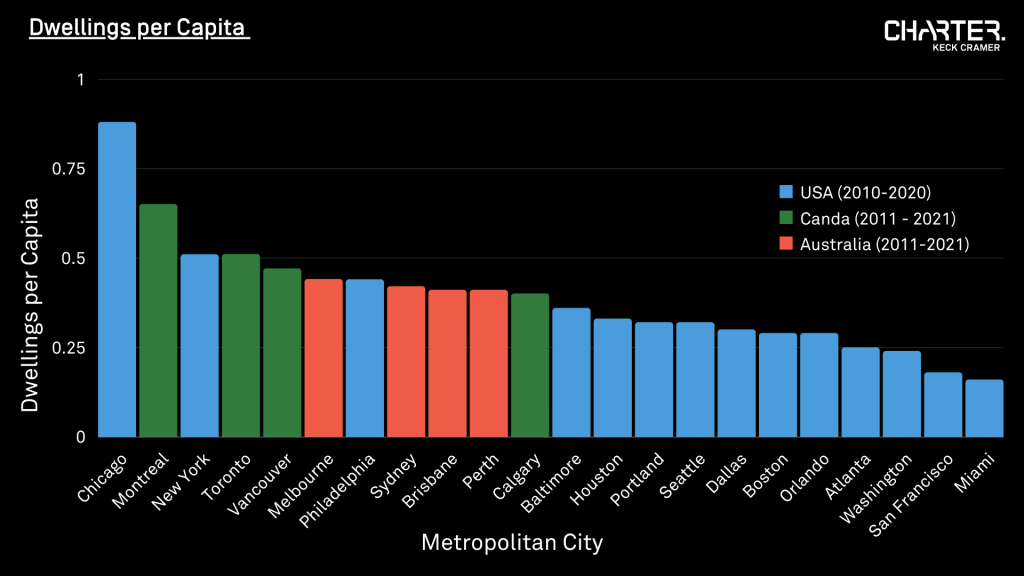 NOTE: The UK Census 2021 statistics for dwellings have yet to be released.
Source: ABS, Statistics Canada, US Census Bureau, Charter Keck Cramer

-It is also interesting to compare the relative maturity of the apartment markets in Australian cities to those in Canada, the USA and the UK.

-The apartment* markets of Australian cities remain comparatively immature by way of comparison to many of these overseas cities. Part of this explanation is the key role the greenfield (house and land) markets play in Australia however there is a noticeable trend towards higher density living which reflects a structural change in living preferences across Australia.

There is a large and important role for apartments (both Build to Sell and also now Build to Rent) to play in accommodating the growing populations of Australian cities. Given the increase in house prices and the structural change in living preferences (trending towards both higher density living and also longer term renting) it is anticipated that the role of apartments will become entrenched and pronounced over the next decade. This presents significant opportunities for developers and investors who take a longer-term view of this segment of the housing market.

Get in touch with our team to see how this can assist with your next project.